The cheerleading cheers in Bring It On have a sassy pizazz that have made this series of movies popular. While you can't exactly use the cheers as they are, you can adapt many of them to work for your own squad. Keep reading to find out more about the cheers, what made them popular and elements that you can borrow for your squad!

The movie begins with a hello cheer that introduces the cheerleaders to an auditorium full of very happy fans. By now, anyone that has seen the movie is familiar with the often arrogant, self-promoting beginning cheer in "Bring It On". There isn't a squad in the world that would come up with this type of self-promotion, but then again, neither would the fictional Toros as we quickly find out it was a dream.

Generally, hello cheers are done to introduce a squad, but often the one cheerleader who is introducing herself does motions on her own. In this sequence, we see the entire squad doing motions with the single cheerleader.

Cheers should never have curse words or lewd language. It would be considered very unsportsmanlike.

The Try Out Cheer

After watching a slew of really horrible cheerleaders, the Toro squad finally sees Jaime, Whitney's little sister who actually does a real cheer with real motions. Her try out cheer is definitely the best they had seen, but that's not saying much.

When trying out, be confident and have your cheer memorized. Make sure you know what the squad is looking for.

Jaime had all of the enthusiasm of a slug. When you're trying out, you want to be enthusiastic, keep your motions sharp and your voice loud and strong.

Brrrr, It's Cold In Here

Brrrr, It's Cold in Here. . . is the first time that viewers find out the Toros' former captain has been stealing cheers. The lyrics are sassy, and they have been copied by many squads. It goes without saying that stealing cheers from another squad is a no-no. However, here are a few ways in which you can take that cheer and make it your own:

Cheerleading Exchange at the Football Game

At the Toros first football game while the players are fighting, the other squad's cheerleaders come to tell the Toros they "suck"- complete with the words spelled out on their spankies. The Toros counter, asserting that "it's okay" because the other squad is going to be pumping their gas someday. Tip to Use

Exchanges between squads and mild taunting can all be in good fun at a game. Before any "cheer off" type cheers happen, just make sure that the other squad is fully aware and has time to prepare an appropriate come back cheer.

Don't tear anyone down. Remember, a cheerleader's job is to promote sportsmanship and enthusiasm. 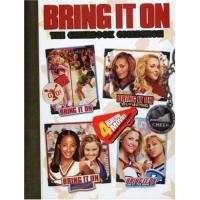 After the Toros repeatedly get slammed and fail to make any productive plays in their game, the cheerleaders open up with a repetitive cheerleading cheer to spur the defense on. This is a perfect example of what to do when your team is pitifully losing. A defensive cheer is always appropriate when your team is on the defense, but something that is easy for the crowd to catch on is especially appropriate in this situation.

The Toros are Outed

It's bad news for Torrance and the Toros when the Clovers show up at their game and "out" them for cheer stealing. Up until this point, the Toros were considering using the stolen routine. This is never a good idea.

Pages Dedicated to Cheerleading Cheers in Bring It On

If you're looking for more lyrics and other information about the Cheerleading Cheers in Bring It On, make sure to check these pages:

0
Comments
© 2006-2020 LoveToKnow, Corp., except where otherwise noted. All Rights Reserved.
Resources, Advice & Tips for Covid-19
Read More
Cheerleading Cheers in Bring It On