Many people claim that cheerleading is not a sport. The reasons for this are varied, but essentially, cheerleaders have not traditionally competed (this of course is changing and changing rapidly at that), and many people don't consider doing routines a "sport" in the same way that football or basketball is a sport. So is cheerleading a sport? Or is it merely a past time?

Arguments that Cheerleading is Not a Sport

One definition of sports is that they require some type of physical ability or skill that has to be learned and practiced. While no one would argue that cheerleaders practice, it can be argued that cheerleading, when it is simply yelling into the crowds, does not require a great deal of skill. Anyone can learn routines and yell into the crowd as long as they smile a lot.

With the advent of competitive cheerleading as an activity in its own right, cheerleading can arguably require competition. However, what if the cheerleaders are just clapping and yelling at games? Perhaps the school doesn't compete. Many schools do in fact have cheerleading squads that do not attend competitions. In this case, does cheerleading qualify as a sport? Not according to the National Federation of State High School Associations and the Women's Sports Foundation's definition of a sport. Additionally, having the competitions required to be seen as a school sport would also likely mean that cheerleaders would be unable to support their teams during games.

Many would say that cheerleading is not a sport because it does not involve a defined strategy. Even if you are on a competing squad, the goal is to get the judges to think that you do your stunts and routine better than the other squads. However, this would also mean that competitive diving, gymnastics and other similar aesthetic activities are not sports either. 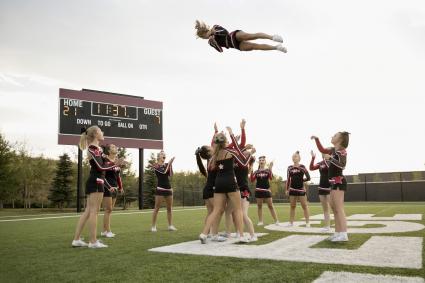 Cheerleaders might make contact with their cheer team, but they don't come in contact with opponents even at competitions. This one of the criteria that makes the "not a sport" argument. However, there are other sports without physical contact like golf or swimming.

While schools and teams might compete against one another in cheer competitions, school-based cheerleading doesn't have specific recognized divisions like basketball or football. This, according to Deborah Slaner Larkin, Chief of Special Projects at the Women's Sports Foundation, is one of the reasons that cheerleading shouldn't be recognized as a sport.

Problems with Recognizing Cheerleading as a Sport

However, recognizing drill teams, cheerleading and similar activities as a sport gets far more complicated than whether anyone thinks that cheerleaders are athletes. In fact, the debate delves deeper into Title IX politics, and other issues.

Not recognizing cheerleading as a bona fide sport means that there is no national governing agency, though the International Cheer Union (ICU) has been given provisional recognition, that determines what type of safety training coaches need to have. This also means that cheerleaders at the college level don't have on-site athletic trainers. Orthopedic experts say, after looking at the statistics, that many cheerleading injuries could be prevented with proper safety precautions. As a result, one could easily make the argument that, for the sake of the cheerleaders themselves, cheerleading deserves sport status.

The Politics of Title IX

For almost three decades, the Department of Education's Office of Civil Rights (OCR) actually told schools not to include cheerleading as a sport. Why? The OCR has the task of making sure that schools are not gender biased in their offerings. The sports offerings for schools need to be evenly distributed between girls and boys so that the school is not classified as gender biased. To even out the books, schools were told not to recognize cheerleading as a sport. Some schools have gotten around this by offering a both a spirit club and a cheerleading squad. The spirit club primarily cheers at games and the squad that attends competitions.

Some schools are quite content to keep their status as an after-school club. Why? Because becoming an official school sport makes them ineligible to participate in some national cheerleading competitions. While being considered an official sport would increase safety, it would decrease the opportunities that the squad has to show off their skills.

Deciding Whether Cheerleading Is a Sport

Whether or not cheerleading is a real sport is a question that may never be settled. Although there are good reasons to consider it a sport and it certainly meets some accepted criteria of being a sport, there are many who will never consider it more than an after-school club. One thing is certain; cheerleading is increasing in popularity so much that it might launch itself into sport status without having to try very hard.

28
Comments
© 2006-2020 LoveToKnow, Corp., except where otherwise noted. All Rights Reserved.
Why Is Cheerleading Not a Sport?