Cheerleading pyramids require skilled stunting, a trust amongst the squad, and perhaps most importantly, a keen awareness of safety.

Cheerleading pyramids are essentially one big train of stunting activity. By creatively combining lifts, poses and dismounts, you end up with a sort of mega stunt that is visually impressive. It's important that all the squad members are on the same page. So, when you're teaching cheerleading pyramids to the squad for the first time, it is good to start with the right vocabulary.

How to Build a Pyramid

A pyramid, can be dissected into several parts:

When you first begin working on a new pyramid, it's important that you go slowly and take time to make sure everyone knows what they are doing. Safety, above everything else, needs to be your first concern. Follow this step by step guide for building the best cheerleading pyramids.

Have you ever gone through an entire stunt sequence, explaining every move and transition in detail only to find your squad staring blankly back at you? The first step in executing a great cheerleading pyramid is to figure out what it will look like at the end.

Try arranging your flyers on the floor first. You can use spotters to help if needed. But the idea is to see how the pyramid will look before you put your flyers up in the air. Also, this will allow them to become comfortable with the body position needed to "hit" the pyramid in the air. If that doesn't work, draw a picture.

One sure fire way to miss your pyramid is to not have solid stunting skills. Before you ever attempt to link a pyramid together, spend some time making sure that your flyers can hit their stunts on cue perfectly. At times, this might seem like a tedious step, but consider it an important safety step. If your pyramid is two-and-a-half-high, your mid-bases need to be completely confident in their body positions and what they're doing before you ever attempt to load the top flyer.

Five Steps To a Cheerleading Pyramid 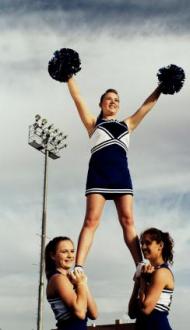 1. Break up the pyramid into sections or sides. Build each side one at a time before putting it together. Use extra spotters and catchers the fist time.2. Load the mid-bases. Make sure they are solid and steady.

4. If the flyer comes down but the mid-bases remain, load the flyer again. If the flyer still can't hit it, take a break to avoid fatiguing the bases.

5. Once the top flyer gets in position and hits it, have her dismount first. Next the mid-bases should dismount.

After everyone can hit all their positions, putting it together should be very easy!