Cheerleading stunts require precision timing, extreme focus, and concentration. Safety rules must be observed at all times. In competition or on the field, make sure you only perform the stunts within your squad's ability level. Regardless of how tempting it is to add one more element to stand out, never add a new move to the routine at the last minute.

According to an American Academy of Pediatrics (AAP) policy statement, cheerleading is responsible for approximately 66 percent of all catastrophic injuries to high school girl athletes over the last 25 years. The AAP claims the risk of injury is higher if:

The most common injuries are to the lower extremities, especially sprains and strains. More severe injuries have been documented, however, such as fractures and head injuries. The potential for catastrophic injury led the AAP to recommend its pediatricians work with athletic associations and cheerleading organizations to make sure specific safety guidelines are followed. They also called for cheerleading be considered a sport to encourage safety precautions.

Cheerleading advocates would point out the importance and necessity of following safety procedures to minimize injuries. However, many also feel that while parents realize there's an inherent risk in football or hockey, they don't recognize the same risk in cheerleading. Recognizing cheerleading as a sport may help change this perception.

How to Minimize Injuries

One of the primary goals in cheerleading is safety. No one wants to see a squad member injured. At the least, it's embarrassing to flub a major stunt but at the worst, the consequences are catastrophic. However, there are steps you can take to ensure the safety of everyone on the squad. Risk is inherent in any sport, and there can still be an injury even while observing safety guidelines. Even so, not following safety guidelines makes serious consequences more likely. 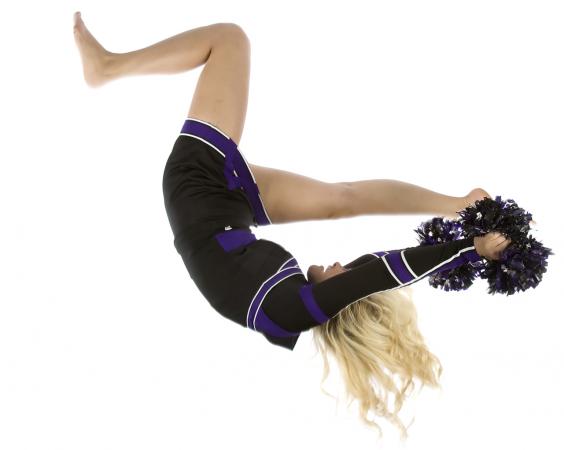 In addition, you should always have an adult spotter. National competitions have adult spotters in the background. Your coach and/or spotter should have first aid training and be experienced cheerleaders.

Just a few more safety tips that will make cheerleading safer for the entire squad:

Following these general guidelines will go a long way towards keeping everyone from flyers to bases safe during stunts.

At first glance, it looks like everyone is doing their jobs during this stunt gone bad. A closer look, however, reveals the real problem. Although it looks like the bases' arms were in the correct position, each person was spaced too far apart, and the flyer fell right through the wide open space left in the center.

This stunt ended with a base having a broken nose. From the video, it looks like the flyer didn't keep her legs tight through her final rotation and lost control of her descent.

The Importance of Proper Training

One thing's for certain. Cheerleading is here to stay. USA Cheer provides rules and guidelines for cheerleaders of all ages. Yet, unlike most other high school sports, such as football and basketball, cheerleading is often unregulated by state sports agencies. Consequently, many coaches are not properly trained on safety procedures and many squads don't follow safety guidelines. This is a problem because just winging it until you get it right may cause devastating injury.

Some professional sports organizations, such as the NCAA, recognize cheerleading as a sport and have implemented regulations. For example, cheerleaders must have a physical before participation. Likewise, most cheerleading safety organizations would like to see cheerleading regulated across the board. As long as cheerleaders keep pushing the envelope with stunts, injuries are inevitable. But the risk of serious injury may be reduced if all squads and coaches receive proper safety training.