The Dallas Cowboy cheerleaders are probably the most well known cheerleading squad in the NFL. They have a rich history and tradition, and consequently, women come from all over to try to become part of this truly elite squad.

The Dallas Cowboys have always had a cheerleading squad. Read on to find out how the Dallas Cowboy cheerleaders (DCC) went from local high school students to a world class precision dance team.

In the 1960's, at the inception of the Dallas Cowboys team, they invited local high school students from the Dallas/Ft. Worth area come to cheer at home games. This was customary at the time; no NFL team had regular cheerleaders as part of the overall organization. The high school students were glad for the exposure, and they were surely bursting with Dallas, Texas pride.

The Era of Sports Entertainment

In the summer of 1972, the owner of the Dallas Cowboys saw an opportunity to expand on the idea of sports as entertainment. He originally tried to hire models to stand on the sidelines during the games. However, the models weren't physically fit enough to do their jobs in the hot Texas sun. He needed athletes that looked like models, and thus the idea of a dancing and cheering squad was born.

In that first year, they chose seven girls to become the first ever precision dance team to grace the sidelines of an NFL football game. They spent their entire summer at camp and choreographed and worked on new moves for the sidelines. They became celebrities Very quickly, and thus was born the famous Dallas Cowboys Cheerleaders.

As the cheerleaders continued entertaining, they became a phenomenon unto themselves making numerous television appearances and even trips abroad.

It seems that everyone wants to see the Dallas Cowboy Cheerleaders, and consequently, an elite squad was formed that puts on variety shows at various venues as requested. The girls in the show troupe not only dance but also sing and act. The troupe is described as a "variety show extravaganza" and the audition process is separate.

The exposure of being on the squad helped launch the career of quite a few of the former Dallas Cowboys cheerleaders.

Just about every type of American woman you can imagine is represented in the current and former cheerleaders for this team. You'll find teachers, company executives, nurses and students. A current cheerleader might be anywhere from 18 to 36 years old. Some are married and some are not. Some even have families.

The Dallas Cowboys Cheerleaders are required to:

The Dallas Cowboys Cheerleader organization reaches out to youth in a couple different ways aside from their regular community service appearances.

Every year, the Dallas Cowboys organization holds a camp for girls from ages five to fourteen. The girls practice and learn new routines at the DCC training facility. Camp offers an opportunity for young girls to gain self confidence and performing skills. In addition, the DCC juniors are chosen from camp participants. 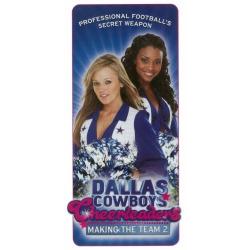 The Junior Dallas Cowboy Cheerleaders are girls, ages 7 to 14, who are chosen from the camp participants based on their technical skill, ability to memorize routines and good behavior. They have many exciting opportunities all over the Dallas/Ft. Worth area.

The Dallas Cowboys Cheerleaders competition is unique in that it is a drill and dance competition. Cheerleading squads who dance can perform their routines in the stadium. There are also awards for choreography, as well as individual and partner awards. The winners are able to perform their winning routine during a pre-game or pre-selected half time show. The opportunity is very exciting.

At try outs, the Dallas Cowboys Cheerleaders organization is looking for a variety of women that portray an "All American" image. They are also looking for women who have exceptional dance talent and great showmanship. Each current member of the squad must try out each year. This ensures that the organization is choosing the best possible crop of cheerleaders.

The auditions consist of:

Afterwards, the judges will announce training camp candidates, and your adventure as a Dallas Cowboys Cheerleaders begins!

If you are interested in trying out for the squad, go to their website to find out more information.

Each year, a select group of the DCC take on ninety-plus hours of shooting on location in beautiful and exotic places. From those hundreds of photos taken, a select handful of the best pictures end up on a calendar. The calendar has become almost be a mini-franchise of the DCC. Visit the Official Store of the Dallas Cowboys to purchase the upcoming year's calendar when it becomes available.