There are few long running character skits that have been imitated as frequently as the Saturday Night Live Spartan cheerleaders. Their often inappropriate antics have earned them a somewhat iconic status for SNL skits.

The socially clueless Spartan cheerleaders were played by Cheri Oteri and Will Farrell as a recurring sketch on Saturday Night Live in the 1990s. After having been rejected from the regular cheerleading squad, Craig and Ariana decide to create their own "squad" with just the two of them.

Of course, merely showing up in cheerleading uniforms at school events where you are not wanted is inappropriate in and of itself. However, Craig and Ariana often showed a lack of taste in their cheering as well, and this is part of what made it the skit so funny. In between some of their more common cheers like the roll call and the perfect cheer, there was often some type of cheer touting the merits of safe sex, G-strings or something else equally inappropriate for a school event. In particular, it was their shouting the innuendo (such as "Safe Sex") much in the same way that you'd shout, "Go, Fight Win" at the end of a cheer, that won them a spot on the "tackiest" list.

The viewer first sees the pair cheering at a football game and is told to go home by a real Spartan cheerleader (played by a guest star). During their next skit, the basketball game, the principal tells them to leave the cheerleading uniforms on his desk on Monday. Craig heartbreakingly tells him that they cannot just turn their school spirit off and on. Eventually, the SNL Spartan Cheerleaders are shown entirely out of context.

"Cha-cha buchee. .." was the start of Ariana and Craig's awkward roll call cheer. The cheer consisted of one partner clapping a beat while the other "cheered" claims about how fantastic they were.

The perfect cheer was a way for Craig and Ariana to supposedly smooth over whatever conflict arose during the skit, and it served as a somewhat iconic way to finish off the dialogue. Ironically, it wasn't a cheer at all but instead some poorly choreographed dance moves put to whatever popular song they had on their boom box.

The Spartan cheerleaders often have off camera counter parts to whom they are yelling during the event. In particular, Ariana has Alexis - a nemesis in which you can see the two faced nature of teen relationships mockingly played out. Alexis is one of the few sideline characters that eventually makes an appearance when Craig and Ariana accidentally stumble into her giving birth at the hospital where they volunteer. In addition to Alexis, there was often an off camera conversation with Craig's parents. Usually guest stars would come and help round out the skit. 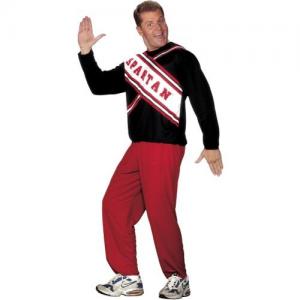 If you miss the Spartan Cheerleaders or are too young to have seen them in action, there are still a variety of places where you can find Craig and Ariana showing their stuff.

If you want to read just the transcripts of the skits so you can imitate them later, you're in luck. Several sites including SNL Transcripts offers written versions of all of the skits from every episode. Some classic favorites include:

Always inappropriate and usually hilarious, the Spartan cheerleaders will be remembered as one of the funniest skits on SNL.