Sideline basketball cheers help fill the gap while the team is on the floor and tension is at its highest. For anyone who loves the sport of basketball, the heart thumping rhythm of the game is only amplified by the cheers performed by the cheerleaders on the sidelines. Sideline cheers can urge the fans to shout louder and encourage the team to play harder than ever before. Sideline cheerleaders have an important role to play, and there is a lot of thought that goes into the cheers and chants shouted during a basketball game. The word "Wildcats" has been used as the team name in these original cheers, but you can simply replace "Wildcats" with your team's name.

When your team has the ball and is looking to score, these offensive cheers give them added motivation.

When the opposing team has the ball, help motivate your team to steal the ball and stop any shots. 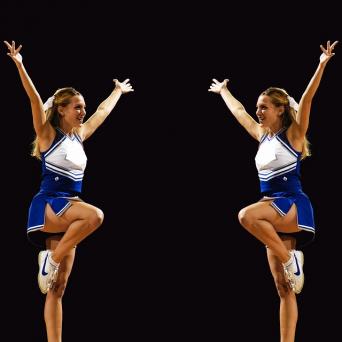 The transition between offensive cheers and defensive cheers needs to be smooth, even when you have to shift between the two quickly. The last thing you want to do is cheer the opposing team to victory. When the ball changes hands in the middle of your cheer, call out one of these transitions to move seamlessly to a new one.

Wait a minute, what a day
Down the court the other way
Now we say…

Hold up, wait a minute,
The Wildcats are switchin' with it
Now we gotta flip and spin it...

Stop! Reverse those words
The Wildcat (offense or defense) took a turn

After chanting the above, you can easily transition into a new chant or cheer that suits your team's current play. Have fun, be creative, and you're certain to come up with different cheers that perfectly suit your individual team and school.

There are many places to find popular and common sideline basketball cheers. Some cheers are common to all cheer squads and are well known. "Defense Attack, Get it Back" and other general defensive cheers encourage the team to be assertive and get the ball back. Cheers like "Fire it Up" help get the team and the crowd hyped up for the win.

LoveToKnow.com offers information on many types of cheers for basketball that can be used as is or adapted to the sidelines.

Because space is very limited on the sidelines of a basketball court, sideline basketball cheers need to have small, tight moves that don't require a lot of extra space. Big jumps, pyramids, and cheers that require separate rows need to be saved for the halftime or quarter breaks. You may be directly in front of the bottom row of bleachers, so watch out for any cheers that require high kicks as well. The last thing you want to do is kick a fan in the nose.

Basketball is a fast paced sport. The ball can move from one end of the court to the other at high speed. Because of this, sideline basketball cheers must be short and to the point. For example, a long offense cheer may lose its point as the team shifts to defense in the middle of the cheer. Because of this, short, crisp chants are much better suited for cheerleading for basketball.

These cheers should focus on things such as defense, taking the ball back, making a basket, or other short and quick points. Basketball cheerleaders must also be ready to shift from one cheer to the next as the ball changes hands and the team shifts from offense to defense. It is a good idea to have one cheerleader or a coach keeping an eye on the game at all times who can signal to the other cheerleaders to shift focus. This is usually the captain's job. The squad should practice transitions from one type of cheer to the other.