Sideline cheerleading is a term sometimes used to differentiate between team support cheerleading and competitive cheerleading, even though not all cheering may be done on the sidelines. Sideline cheers are performed on the periphery of the field or court to encourage the team and keep the audience energized while the game is going on. General cheers, offense cheers, and defense cheers are all used on the sidelines for football and basketball, and are often short and performed in repetition.

Get the audience excited! Go cheers and many other general cheers performed on the sidelines are just right for energizing a crowd. Modify these cheers for your own school.

These work well for shorter mascot or school names. They can also be used for affirmation words. For example:

Best! Best!
Hawks are the Best!
Better Every Season
Trample the rest! 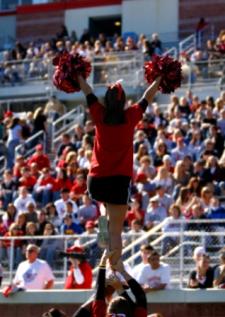 Harlem shuffle, Gangnam style
Dance with us, make sure you smile
Patriots run but never push
Dribble, dribble, spin and swoosh
Time to dance 'round the other team
Dance so fast you make them scream
Go Patriots!

Go cheers are great for sidelines. Not only can they get the audience involved easily, they can also be modified to mix things up.

C'mon Get With It!

Since sideline cheering should really engage the audience, crowd response cheers are perfect. One of basic formats is a "we say, you say" cheer involving the crowd. This can be done using team colors, team name and mascot, victory or support words, and more. Call out cheers are also popular, starting with terms like "hey crowd" or "hey, fans" and continuing with instructions in cheer form for interactive crowd responses.

Do You Hear Us?

Hey fans, do you hear us?
There's no need to be so cautious
When we shout out a word
Let us know that you heard
We say Dragons
You say (point at the crowd)
Go! (point)
Fight! (point)
Win! (point)

Stand Up in the Stands

Hey, crowd!
Stand up in the stands
Clap your hands
Spin around
Stomp the ground
Yell black and gold (point at the crowd)
Our team's fame is foretold
Go, Gators!
Go, Gators!

Sideline Cheers Are the Heartbeat of the Game

Without the cheer squad to lead them, the fans may be unsure about how best to support the team. The role of the sideline cheer is to help excite the fans, encourage the team and even to get everyone involved. The best cheers are the ones that the crowd knows well and chants along with you. Now, go, fight and win!