Although organizations like Varsity and the American Association of Cheerleading Coaches and Administrators (AACCA) have traditionally set rules for high school and college level cheerleading, elementary school cheerleading is an important consideration as well. Since the early years of a child's cheer career will set the stage for basic knowledge, skills and safety, consulting the youth recreational rules and all star cheerleading rules by the AACCA is a step in the right direction.

What to Expect as a Participant

Some schools and clubs offer cheerleading programs for Kindergarten all the way through sixth grade, while other schools only offer cheerleading for third grade and up, or even fifth and sixth grades only. Find out what is available in your area and get your child involved when you feel she is ready to join a squad. If your school or local youth recreational league does not offer cheerleading, you may want to contact local cheer gyms to find out about All Star squads, which can start as young as four years of age (usually called "Tinies").

Prepare your child as much as you can for tryouts. If she learns the routine the day before and tries out the second day, run through the new routine with her as many times as possible the evening before the tryouts. Have her dress the part by outfitting her in cheer shorts, which are available through stores like Dick's Sporting Goods (Soffe brand shorts are popular) and a school T-shirt. Stick to school colors and invest in a pretty bow for her hair. Pull hair up and out of the way.

Remind her to smile and have lots of energy as she does her routine. Your encouragement as a parent will go a long way toward her confidence. Assure her that you think she is fabulous and you know the coaches will see it as well. Later, if she is not chosen for the squad, reassure you that you know she did her best and she will get in next year.

What Is Different for Coaches

Elementary students are quite different from teens. Many of your students may have never cheered before, so holding traditional tryouts can be a nightmare. Unless the size of the group trying out is simply unmanageable, consider taking all of the girls who try out for the squad. One mistake that many new coaches make is to select a handful of cheerleaders. However, competing sports, family commitments or waning interest can quickly whittle away your squad until you have only two or three girls left. It is better to start with too many girls and lose the inevitable few during the season than to start with too few and not have a squad at all. 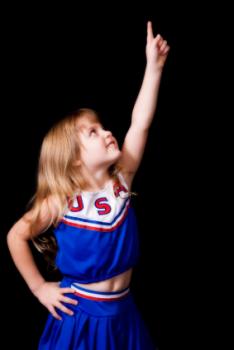 Some things to keep in mind with this age group:

Some rules to consider implementing are: Not missing more than a certain number of practices, keeping passing grades, and not arguing with other cheerleaders on the squad. This isn't much of a problem in elementary, but it can occur and is detrimental to the mood of everyone on the squad.

Although you won't have to deal with the hormonal drama sometimes present on a junior high or high school squad, you may run into a situation where one cheerleader is shy or picked on by the other children on the squad. As the coach, it is your job to make sure that every girl has a good experience. It is best to have a no bullying policy up front. Have a set of consequences for your cheerleaders, where they are first given a warning, then a warning is issued to the parent, and finally they are removed from the squad if the problem persists. You can usually avoid issues by spending time on team building activities from the start.

Some Basic Cheers for Elementary

Remember to keep the motions and the cheers as simple as possible, so that even the youngest squad members can easily learn and perform them. Try cheers such as:

Or, try the unique cheer below, which is perfect for tryouts or a ball game.

We Are the Eagles

Hey fans! We are the Eagles (fill in your mascot name)
We're here to win
We won't be beat
Eagles fans, get on your feet
Go, Eagles!

Keep the motions for this cheer simple. Use motions like the ready stance, touchdown, high V, low V, T, broken T and daggers. You can repeat motions. It is also a good idea to add a jump at the end so you can score the cheerleader's jump on your score sheet.

Whether you are a coach and have to decide which girls to put on your squad, or you are a parent and hoping your child is chosen, keep in mind that this is the beginning stage of a cheerleading career. A score sheet can help a child see areas that need improvement, either during her first year on the squad or before she tries out again next year. Work on these elements all year long and your child will become a varsity level cheerleader before you know it. Well, in a few years anyway.