Many schools have traditional cheerleading squads filled with talented young ladies, but this particular interview focuses on a young lady who decided her community was lacking a squad that combines cheerleading and dance. Hailey Soard is 14 years old and has taken tumbling lessons on and off throughout her life as well as dance classes. She recently started a pom squad for teen girls in her community. This interview focuses on the many different aspects of starting a spirit squad.

LoveToKnow (LTK): Tell our readers a little about yourself and why you enjoy cheerleading and dancing.

Hailey Soard (HS): I love all kinds of sports. I've been taking tumbling lessons for a while with Lori Walker of All Star Tumbling. I enjoy working hard to achieve something like a back handspring and having that sense of satisfaction when you finally nail it. Dancing is in my blood. My grandmother enjoys dancing and is always trying to teach me dances like The Twist and the Mashed Potato and my mother was a dancer in high school and on the color guard. She was also a cheerleader in junior high. She really encourages me to go after what I want. 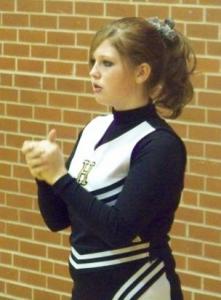 LTK: Why did you choose to start a new pom squad instead of joining an existing squad or just cheering?

HS: When cheerleading tryouts rolled around, I didn't make it this year. I was really upset at first, but my mom encouraged me to find something else to focus on. She mentioned how much I loved to dance and asked if the school had a dance team. This got me to thinking about a new type of squad that would combine dance and cheer. I'm originally from around the Indianapolis area and remembered seeing the Pacemates and the exciting dances they would do. Also, Indianapolis has the Colts Cheerleaders, who also dance. I drew inspiration from all of this and decided I would really enjoy being part of a dance spirit squad.

LTK: Didn't your school have a dance or pom team in place?

HS: No, they didn't have anything like this. My goal for our pom squad is to promote an atmosphere where every girl's strengths can be showcased and we can combine our love of dance with our love of cheering on local teams. I also don't want to be limited to school games. Rather, I want to be allowed to perform at halftime shows at different schools, at public locations, and attend at least one competition.

LTK: How did you go about starting the pom squad?

HS: I started with a sign-up sheet and started asking girls in the junior high who might be interested in being a part of the team. There was a lot of interest at first. Next, I scheduled an appointment to meet with my school principal. I explained to him how many girls wanted to be involved, our goals for the squad and that we just needed a place to practice. He gave me a list of things I needed to accomplish in order for him to even consider it.

LTK: What was on the list of things you needed to accomplish?

HS: I had to come up with a plan for how many days a week and how long we would practice, find an adult coach or sponsor to oversee the team and have that person secure insurance as the team wouldn't be "school sponsored". He would waive the facility use fee that the school sometimes charges. However, he also stated that he didn't really have a place for us to practice right then. One of the gyms was under construction, the basketball and volleyball teams were using the boys and girls gyms and the cheerleaders were practicing in the hall. I decided to start asking other people if they had somewhere we could meet and practice. My pastor at my church said we could use the youth room for our practices, so that solved one of the biggest obstacles to forming the team. 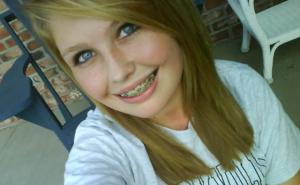 LTK: You mentioned that you didn't really want a coach, but you needed an adult to oversee things...

HS: I really didn't want a coach telling us how to dance. The team I envisioned is very modern with some hip-hop mixed in. I wasn't having luck finding someone in the area, who would coach us for free, who would be that current. I talked to Mom about being an adult supervisor with the title of coach but letting me be the captain and run the dance end of things. She would just be there to keep us motivated, help us with formations, let us know if we were dancing together or out of sync and in case anyone got hurt. She agreed to do that, but suggested that I appoint a co-captain as well for the times I couldn't be there. I chose Amanda Darling, a girl who is in the same youth group at church and has a lot of cheer skills (she can do a roundoff and drop down into the splits without pausing), and asked her if she would be my co-captain.

LTK: Where are you guys right now with your dance team?

HS: Once Amanda agreed to be my co-captain, I included her in the big decisions. We chose music together that we both loved and chose an outfit that is fun and not overly expensive. We didn't want the pom squad outfits to cost so much that we priced talented girls out of participating, so we decided any all-white athletic shoes that were easy to dance in are fine. Then, we just started meeting and working on the dance. My mom would make suggestions from her old school days and we would take it and modernize it and make it our own. We've also worked together to recruit girls. I'm really excited about what we're going to be able to achieve with this team, although it is still going to be challenging to bring it all together.

Challenges in Starting a Spirit Squad

LTK: What are some of the biggest challenges you've faced in getting this squad started?

HS: Really, the biggest challenge has been getting the girls to commit to come to practices. Amanda and I have decided we will move forward with the six or seven girls who are really committed to the team. Seven is enough to perform. When others see how much fun we are having, they will want to join us. We both love what we are doing, so even if it winds up being just the two of us, we'll just enter a talent show. The important thing is to love the process.

LTK: Do you have any performances lined up?

HS: My mom is going to work on that for us. She has a lot of ideas and has made initial contacts, but didn't want to line up the actual performances until she feels we are ready to perform. She is guessing late spring of 2011 for our first performance. There is a competition at a nearby school for cheerleaders and dancers in December. We are planning to go to that and compete as a team.

LTK: You are also a cheerleader at your new school. How are you juggling the dance team and cheering at school?

HS: I changed schools last week and amazingly they hadn't started cheering yet. I was really surprised and happy to find out I had a chance to cheer again. So far everything is fitting nicely. Since the dance team is not practicing at full speed yet, as the girls learn the new routine, I am able to easily juggle cheerleading and dance. For example, this week I have cheerleading on Monday and Wednesday, meet with my tumbling coach on Thursday and dance team Friday. I don't really see any of it as separated though. It is all related. When I am with the dance team, I am practicing dances, which I might one day use in cheer. When I am cheering, I am practicing cheer moves that I might use in the middle of a dance routine. Also, Amanda and I have a rule for our spirit squad. We use each girls' talents and show those off. When we created the dance, we left a spot where I can do a roundoff/back handspring, where Amanda can do her roundoff into the splits, where another girl can do her high jump and so on. We want each girl to be able to showcase her abilities.

LoveToKnow Cheerleading would like to thank Hailey Soard for taking the time to share the ins and outs of starting a new spirit squad with our readers. We wish her the best of luck both with her new cheerleading team and her pom squad. Hopefully her story will inspire other young cheerleaders to remember that even if they can't be part of their school's cheerleading squad, there are many other options for showing school spirit.