The story of Lacey Henderson, a cheerleader who has accomplished more on one leg than some people do in a lifetime, is inspiring and should motivate every cheerleader who reads about her journey. LoveToKnow had the pleasure of chatting with this determined young lady about her love of cheerleading. She even shared words of encouragement for cheerleaders struggling with minor setbacks.

Lacey Henderson has always been a girl with big dreams and the determination to accomplish anything. At the age of nine, she was diagnosed with cancer. There was a spot on her lungs and synovial sarcoma on her leg. When the chemotherapy only shrank the lump marginally, doctors recommended amputation. What would be an event that might hold back many young people didn't seem to stop Lacey from pursuing her dreams and achieving everything she set out to do. She was captain of her high school cheerleading squad, All-American with academic honors and received a scholarship to the University of Denver for cheerleading.

LoveToKnow (LTK): Lacey, thank you for agreeing to talk to us about your amazing journey in the world of cheerleading. I know you were inspired by the movie Bring It On. When did you first start cheerleading?

Lacey Henderson (LH): I started clinics and private tumbling lessons shortly after I saw it! I was in the eighth grade at the time, the spring before I started high school.

LTK: You were kind of a tomboy growing up? What other sports did you do?

LH: I had to play with my brother and the neighborhood kids who were all boys, so we pretty much ran around all the time playing "cops and robbers," wrestling each other and speeding around on our bicycles. As for traditional sports, my brother and I would run at our dad's track camps, and I played soccer and baseball during the spring and summer. 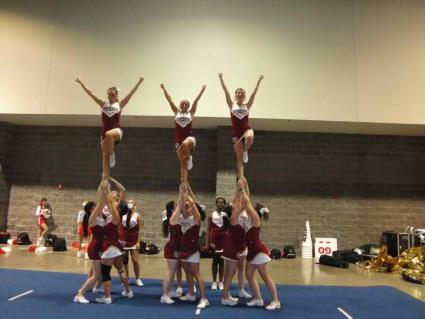 Lacey's Illness and Losing Her Leg

LTK: Would you mind sharing what happened to your leg with our readers?

LH: When I was nine years old, in February of 1999, I was diagnosed with a rare malignant soft tissue tumor called Synovial Sarcoma. I was on experimental chemotherapy for six months, and I had less than one percent tumor kill, but was showing signs of permanent kidney and liver damage. I made the decision that in order to survive and live a healthy life again, I'd have to give my leg up, having it amputated six inches above the knee.

LTK: Did it ever slow you down? I know you mentioned your parents never told you that you couldn't do something. Can you share that a little with our readers?

LH: It never slowed me down! Once I got the leg amputated, I felt so much relief that I was ready to run around as soon as I got my health back. My parents were absolutely instrumental to my physical and emotional recovery. They made it a point to treat me the same whether or not I had hair or a leg. I still had to make my bed, and couldn't get away with anything. My parents never limited me to doing things that were "safe" because of my leg. They just assumed that if I wanted something badly enough, I'd have to put in the time and effort, but that I was capable. I am incredibly lucky to be surrounded by such a phenomenal support system like that.

Challenges as a Cheerleader 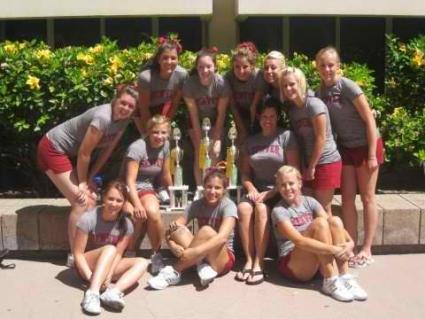 LTK: What are some of the challenges you faced as a cheerleader?

LH: in the beginning, just knowing where my body was in space was difficult, but I think most people new to the sport experience that. It was frustrating coming from an athletic background, trying something new with virtually a new body, and struggling through it. I like to joke that gymnastics was my glorified physical therapy, because it helped me adapt the things I needed to change to successfully execute any skill. Jumps and tumbling were definitely the most difficult to master just because I had to see how my prosthetic behaved, but also how much control I had over it while using the rest of my body. I had great coaches growing up that were very patient with me and eager to see how we could make things work. With a little team effort, I was able to master most anything.

LTK: What is your greatest strength as a cheerleader?

LH: Definitely a positive attitude and making people laugh. Going over any particular routine for the 200th time can get a little old, and any teammate can get easily irritated with it. I'm lucky enough to have lived through such extraordinary circumstances that I can remove myself from any situation, and see the bigger picture. It's important not to sweat the small stuff, and no matter how difficult or frustrating a stunt, tumbling pass or choreography can be, it's definitely not impossible.

LTK: What has been the reaction of other cheerleaders you've encountered over the years when they learn you did all you've done on a prosthetic leg?

LH: Most everyone has been supportive and frankly in disbelief. I never did cheer or gymnastics before I lost it, so to me, I would never know the difference. It is cool, though, to be a walking visual example for people just starting to see what is possible with hard work and discipline.

Advice for Other Cheerleaders

LTK: What would you tell a young cheerleader who was facing a disability of some sort?

LH: I would tell them that in most any sport, especially cheerleading, our disabilities affect maybe 15 percent of what we can do. The biggest disability you'll come across is mental with being afraid to try new things. No matter what anyone has, our bodies are capable of amazing things, but we have to let ourselves try it first.

LTK: What would you say to a girl scared to throw her back handspring?

LH: Ha! Ha! I am always a little anxious even now throwing the first one after not doing it for a while. Our bodies remember how to tumble, once your coach sees you're ready, you have to mentally be okay with throwing the pass. Again, my biggest disability, especially with tumbling, is in my head. It was nothing to do with my physical capacity.

LTK: You received a cheerleading scholarship? What did you do to achieve this?

LH: I had been talking to my college coach for a little while before I chose my school. For spring try outs, I totally freaked out, got scared and didn't show up. When I was already in school, there was a carnival for athletics and activities around campus as part of orientation. I don't think you ever really get cheer out of your system, so I was curious and got information. There were only two more spots on the team, and everyone there was so intimidating. The day of try outs I thought about not going until like literally an hour before I frantically called my mom to bring my cheer shoes to my dorm. I just wanted to see what would happen. I did the three day clinic and try outs, and I got the call from my coach the next day to tell me I made the team. The University of Denver has an amazing program where all the girls on the team get partial scholarship, which I didn't even know at try outs. It was a pleasant surprise and helped me out financially for all four years.

LTK: Where did you find the confidence to do all you've done?

LH: I definitely think I get it from different places. I have an outstanding support system with my family, which over the years has reinforced my confidence in my self. After losing my leg, no one ever really told me I couldn't do anything, so growing up I just assumed I was as capable as anyone else to try new things. Sports and cheerleading gave me more confidence in myself than anything else. Nothing is scarier than throwing that first back handspring by yourself. Once I could do that, I was ready to run for president!

What's Next for this Amazing Young Woman

LTK: You just graduated. What's next?

LH: Right now I'm just working. I recently started running with hopes to be competitive at the elite and international level with the Paralympics. This June, I just got back from national championships for track and took home silver for my third race ever, which was totally awesome. I have a lot of training ahead of me, but cheer has taught me so much about dedicating yourself to a sport and setting goals, that I am pretty positive of what is to come in the following years.

LoveToKnow would like to thank Lacey Henderson for taking the time to talk about her experiences as a cheerleader and sharing her unique perspective. She is a living testimony that with hard work and dedication that anything is possible.